Posted on November 9, 2011 by ohmygoodygoodness

This recipe came straight from the Pioneer Woman. I love everything about this dish. It is easy and delicious, it just takes a little planning ahead to marinate your beef.

I haven’t made this in awhile, but I wanted to get it on here this week because it goes with the whole Asian theme. The flavor combinations in this dish are unreal. I think the key is making sure you slice the meat against the grain and then slicing it thin enough that it cooks quickly and remains tender. As well as, making sure your pan stays very hot through the entire process.

** For the gluten free version, just use GF Soy Sauce and make sure your cooking sherry is GF as well. The one I used says it is naturally gluten free.

With a very sharp knife–cut the flank steak into very thin strips. You’ll want to slice against the grain, slightly on a diagonal (rather than a ninety degree angle to the grain.)

In a bowl, mix together soy sauce, sherry, brown sugar, cornstarch and ginger. Add sliced meat to bowl and toss with your hands. Set aside.

These were the Pioneer Woman’s directions. I prefer to allow my beef to marinate in this sauce for a few hours before I cook it. You can do it either way. If you are going to allow it to marinate awhile, just cover your flank steak with the sauce, and put it in the refrigerator for a couple of hours. 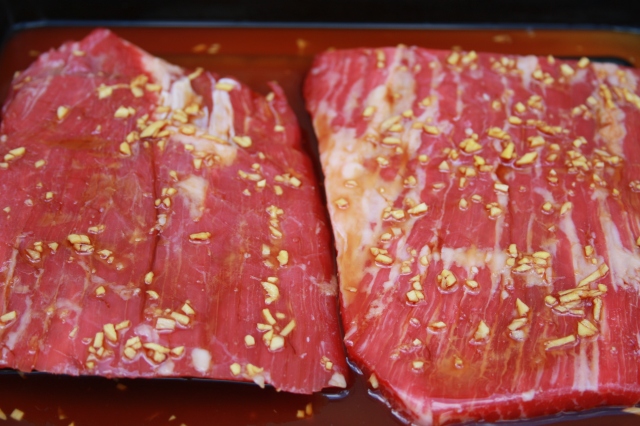 Heat oil in a heavy skillet or a wok over high heat. Add snow peas and stir for 45 seconds. Remove to a separate plate and set aside.

Allow pan to get very hot again. With tongs, add half the meat mixture, leaving most of the marinade still in the bowl. Add half the scallions. Spread out meat as you add it to pan, but do not stir for a good minute. Turn the meat to the other side and cook for another 30 seconds. Remove to a clean plate.

Repeat with the other half of the meat, allowing pan to get very hot again first. After turning it, add the first plateful of meat, the rest of the marinade and the snow peas. Stir over high heat for 30 seconds, then turn off heat. Check seasonings and add salt only if you need it. Mixture will thicken as it sits.

Serve immediately over rice and sprinkle crushed red pepper over the top to give it some spice.

9 Responses to Beef and Snow Peas