Posted on November 3, 2011 by ohmygoodygoodness 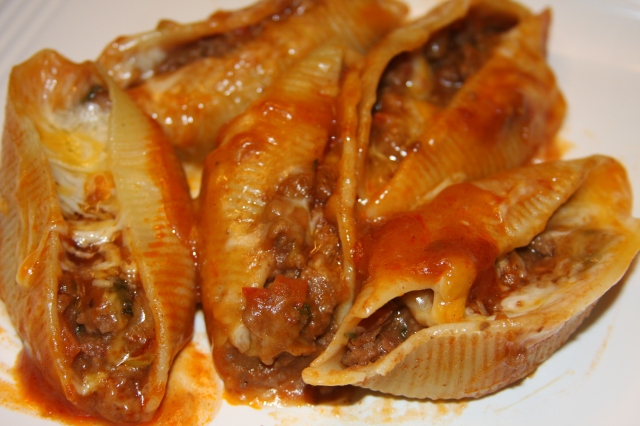 I have to tell you, these things are the “bomb.”

They’re so amazing that even my dog said, “EEEEEEEEEEEE, Chihuahua!! 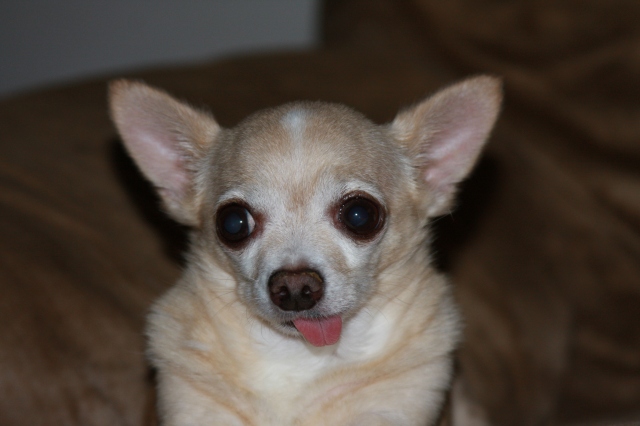 Ok, ok. In all seriousness, this dog doesn’t really talk. But if he could…

I like the idea of cooking and stuffing these jumbo pasta shells. I just don’t like the way they are normally served because I don’t like ricotta cheese. I figured that there had to be other great flavor combinations out there to make and stuff in these lovely little shells. And if you have other suggestions, I would love to hear them!

Since we have been having a lot of Mexican style dishes lately, I decided to stick with that theme. I came up with a plan and they turned out even better than I thought. In fact, the two pickiest eaters in the house had seconds! My teenager has even mentioned them a few more times this week, wondering when I was making them again. That is always a good sign. They also made for great leftovers.

I wanted to have them with a little more heat to them, but knew that if I added it, the three year old wouldn’t be able to eat them. So, we topped them with sour cream and doused them in Green Tabasco sauce. If you have never tried the green version, you are missing out for sure. It was amazing on top of these shells and added a really nice flavor. You can definitely add some heat to the meat mixture if you wanted to. I think a jalapeno and some red pepper flakes would make a nice addition as well as the hot enchilada sauce instead of mild that I used. I think the next time I will add a 4 oz. can of chopped green chilies too.

** To make this a gluten free recipe, just use GF jumbo pasta shells

** To make this a vegetarian recipe, just leave out the meat. 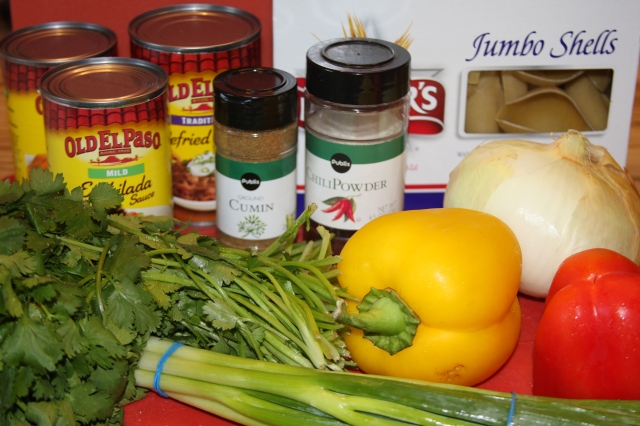 Cook pasta shells according to package directions. Drain and set aside. While those are cooking, in a large skillet over medium heat, put in your sweet onion, peppers and seasonings. 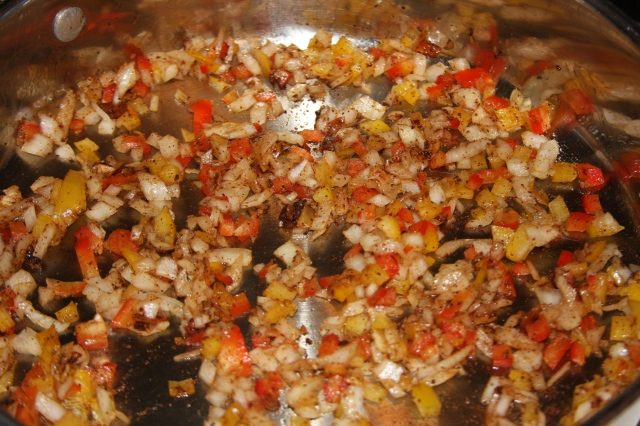 Cook for about a minute or so and then add your ground beef (or turkey) and continue cooking until it is cooked through. Drain any excess fat. (I always use a 90-10 ground beef so that I don’t have all that extra fat.)

Stir in your can of re-fried beans and mix it all up. Add your green onions and cilantro and then about 3/4 of one of the cans of enchilada sauce. Let it cook for about another minute or two and then remove from heat.

I used an 11 x 13 glass baking dish and sprayed it with non-stick cooking spray. Then I added the remaining 1/4 of the first can of sauce and about 1/4 of the second one to the bottom of that baking dish.

Then, open up each cooked pasta shell and fill it up with the meat mixture. Place each shell into the bottom of the dish. I ended up with quite a few leftover shells, so the next time I make it I probably won’t fill them up as full so that I won’t run out of the meat mixture. Place them all close together so you can fit them all in your dish. Pour the remaining enchilada sauce evenly over the tops of the shells. Then sprinkle your cheese over the shells. 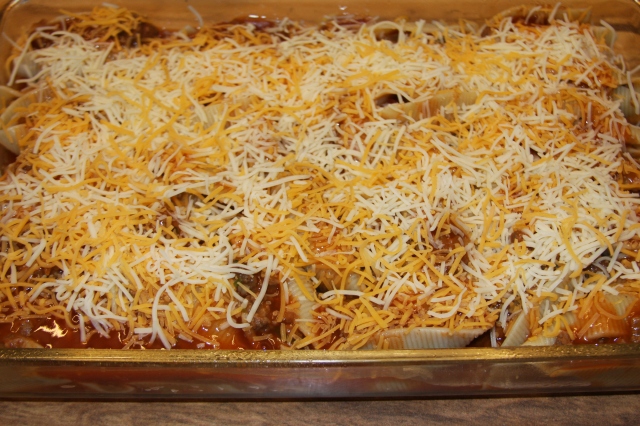 Cover the pan with aluminum foil. Bake at 350 degrees for 25 minutes. Remove the aluminum foil and cook for an additional 5-7 minutes, or until all the cheese is melted. Then top with your favorite toppings.