Posted on December 8, 2011 by ohmygoodygoodness 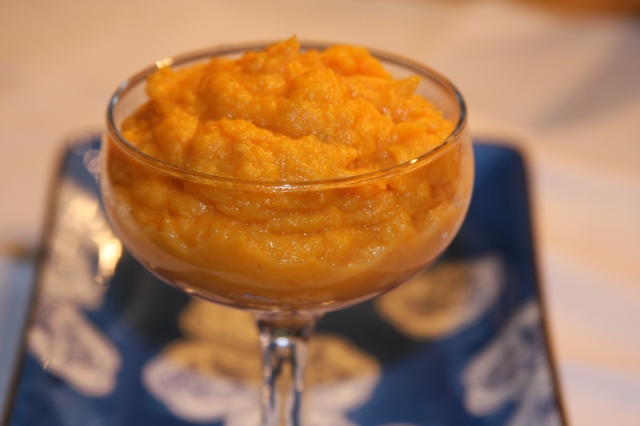 All day yesterday I thought it was Friday. I guess I was really hoping that this week was going to be over already. I hadn’t even thought about dinner and by 7 p.m. everyone was wondering when the heck we were going to eat. I hadn’t been to the grocery so the pickings were slim around here. My husband and kids decided on chicken nuggets and fries and I was definitely not in the mood for that. I had several random things in the freezer and the fridge that I needed to use up that wouldn’t make a full meal, so I just decided to make a few things. One of those things were these sweet potatoes.

On Thanksgiving I made a new recipe for sweet potato casserole that I found here (only I used nothing “light” because, well, I just don’t believe in it!) and I was so hungry while I was doing all my cooking that I made a little side dish of the potatoes for myself. I had some extra coconut milk so I just put some of that in there when I whipped them up and some butter and it was amazing. I am not really a huge fan of sweet potatoes anyway, I usually only eat them at Thanksgiving, but these turned out so great that I could eat them on a regular basis.

I didn’t really measure any of this and since you can make as much or as little as you want at a time, you can really just use your own judgement of how much of the butter and coconut milk you need to make the amount of potatoes you have creamy enough.

Peel and cut your potatoes into chunks like this 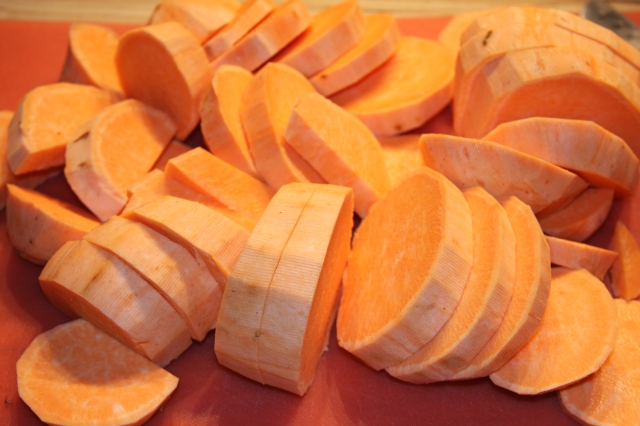 Then put then in a saucepan and give them a good dousing of salt. Then fill up the pan with water until it covers the top of the potatoes. Put them on the stove on medium high heat and let them cook until the potatoes are fork tender. 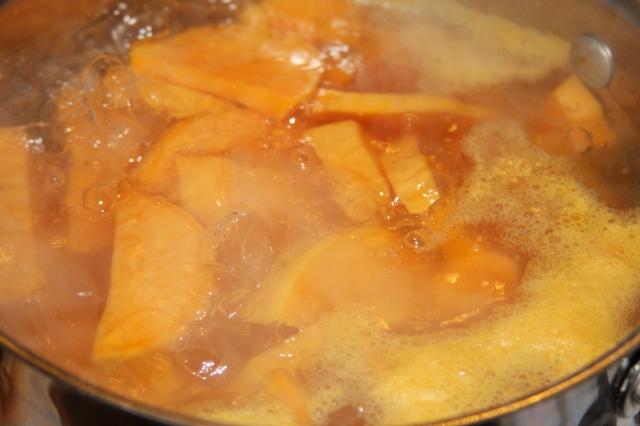 When they are done, remove them from heat and drain them well in a colander. For this next step I used the bowl of my stand mixer, but if you don’t have one a hand mixer will work just fine too.

Put the potatoes in the bowl of your mixer with the whisk attachment. 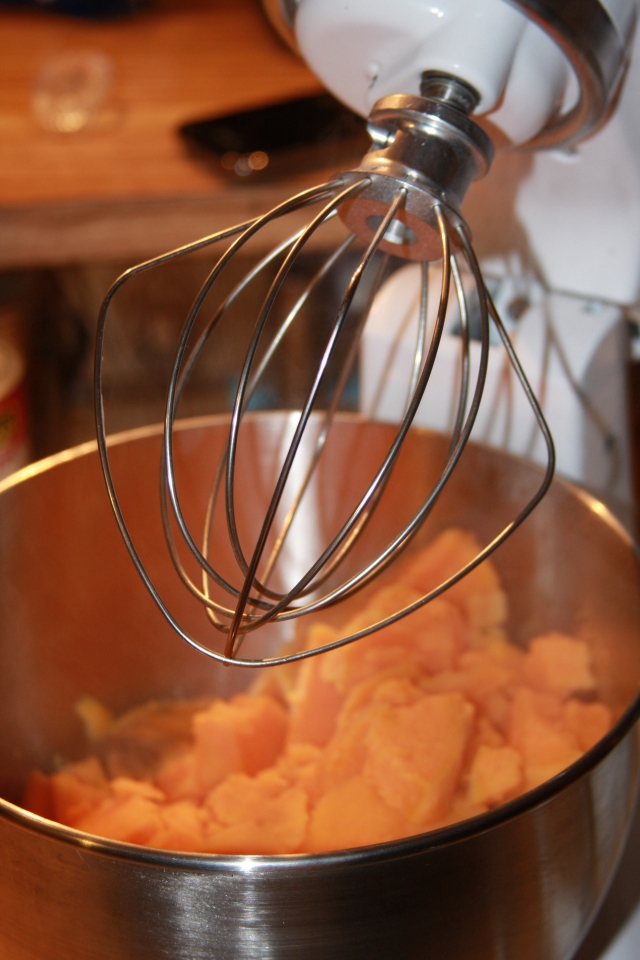 Put it on a low setting and let it go for about a minute or so to break up all the chunks. Then add in your butter and coconut milk. 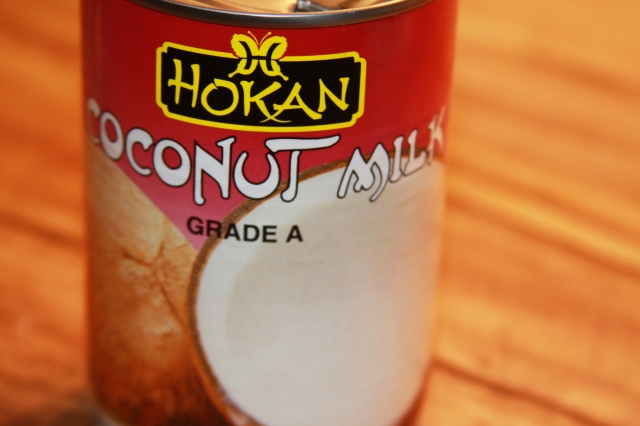 Add these in a little bit at a time until you get the desired consistency you prefer, whisking continuously as you go along. Once you get them how you like them, add in your salt and pepper to taste and their done! 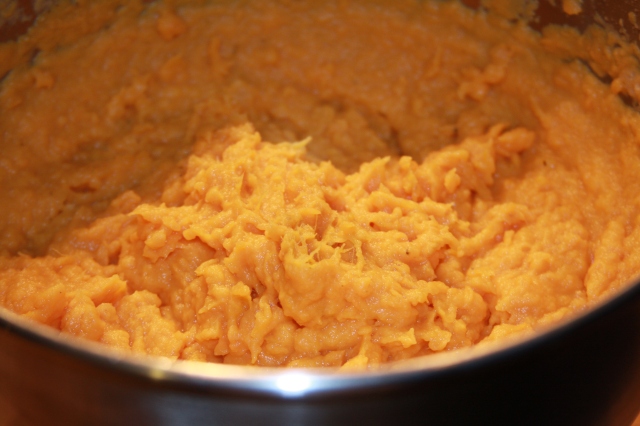 The coconut milk doesn’t necessarily give them a super big coconut flavor, but it does add something different and the flavors blend so well together giving them an extra creamy consistency.

I was just thinking that another good idea would be to do a twice baked version of this and when you put this completed filling back into the potato skin, top it with a few marshmallows, some coconut flakes and a little more butter and put it under the broiler for about 2 minutes or until the marshmallows are toasted. Geesh, that sounds so good I am definitely going to have to try it SOON!

I hope you enjoy these as much as I do! 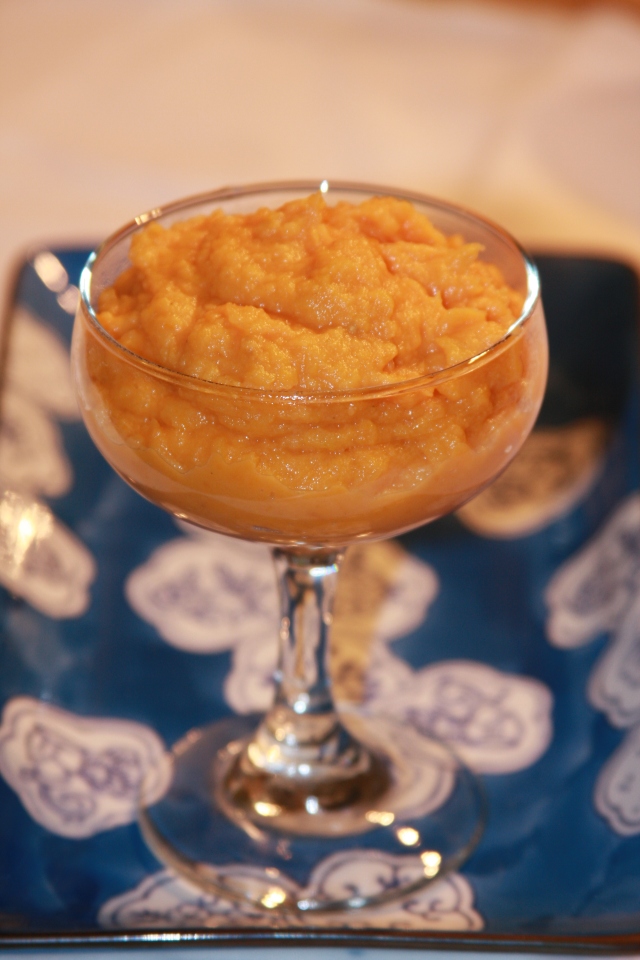 This entry was posted in Gluten-Free, Potatoes, Recipes, Sides, Vegetarian. Bookmark the permalink.